The Best In-Ear Headphones for Guitarists for 2021 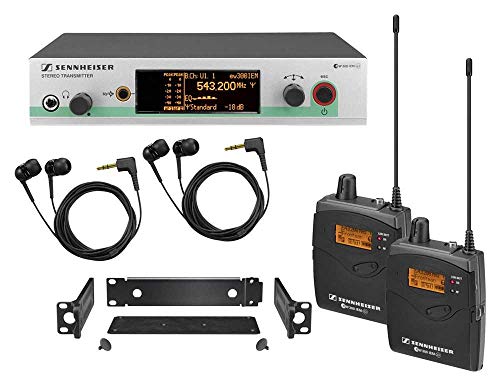 This bundle from Sennheiser is a complete in-ear monitoring system that’s suitable for any show, no matter how big. The bundle includes two EK300 IEM G3 bodypack receivers, two IE4 earbuds, and an SR300 G3 stereo transmitter with a rack-mount kit.

The SR300 G3 transmitter has a bandwidth of 42MHz and is tunable to 1680 UHF frequencies, so it’s highly unlikely that interference would ever be an issue. On top of that, it has an enhanced frequency bank to store up to 16 compatible frequencies for quick selection.

Sennheiser transmitters are always reliable, but the SR300 G3 goes one step further, using the earbud cable as an extra antenna. Even the most animated guitarist will have a crystal clear sound at all times. Another nice feature is that the transmitter has a built-in 5-band EQ, so you can tweak your sound as you like to hear it. The benefit of the EQ is down to personal discretion, but we wouldn’t advise straying too far from what the audience is hearing!

It has an ethernet port so you can hook it up to a computer via the Wireless System Management software. Doing this will give more in-depth visual feedback and control over your sound/signal. As for the signal range, it’s around 300ft, so unless you are playing a 90,000 seat stadium, you should be fine.

The entire unit well built, it’s solid, the bodypacks aren’t too intrusive, and the earbuds come with several fittings for added comfort. 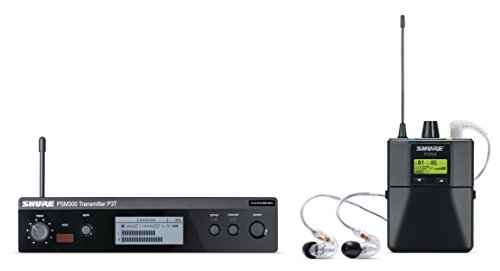 Whether it’s microphones or monitors, Shure is always mentioned in any conversation about wireless audio transmission. The P3TRA215CL is a reasonably priced, easy to use system that gives professional-quality sound.

This system features Shure’s SE215-CL earphones, which are well known for their sound isolation. The sound quality of the headphones is fantastic, especially mid to high range. Much of the sound quality is owed to the system’s detailed 24-bit digital audio processing. 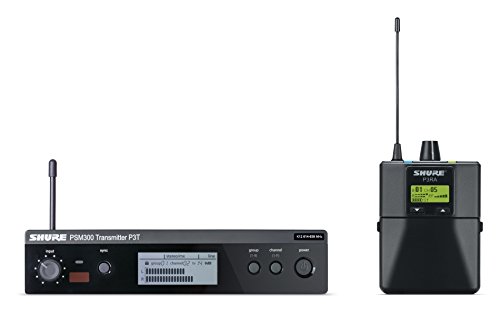 The P3T transmitter has a 606.6MHz to 613.5MHz wireless operating frequency. One of the things that makes this system easy to use is the one-touch frequency scan that quickly finds a suitable channel. Once you find a suitable clean channel, you can start to customize your sound if you please.

The P3RA bodypacks have some advanced customize mix control features. They give you the ability to adjust the mix that you hear with incredible precision. So, despite being easy to use, they do have advanced features for the more demanding guitarist.

If you know Shure, you’ll know they manufacture products that are tough as nails and deliver outstanding listening experience. All that and a wireless range of just under 300ft – perfect! 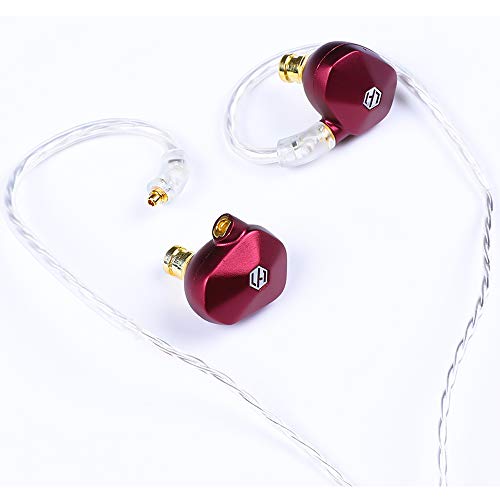 Light Harmonic, if you don’t know already, manufacture some of the best high-end audio equipment from earphones to car speaker systems.

The Light Harmonic Mera earphones are noise-isolating in-ear monitors with a distinctive look. The reason we mention the look of them is that you can tell before you even open the box that it’s a high-end product. Let’s be honest, when you spend a few hundred dollars on earphones, you deserve something that’s well put together. 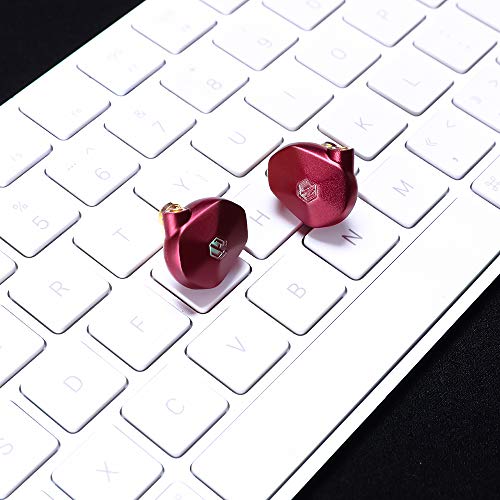 The attention to detail in the build is quite special. For example, the front housing is made from sound tuned copper alloy for copper alloy acoustic damping. The sound chamber is a Light Harmonic exclusive design that offers unbelievable clarity and good bass response.

Earphones can only do so much; ultimately, your sound quality has more to do with the source. But, these earphones are designed to optimize performance according to any device. So, whether that’s an iPhone or a top-class wireless transmitter system, you’ll get the best possible results.

They are as robust as earphones can be, but anything this small is breakable on stage or on the road. So, look after them, they’re great. 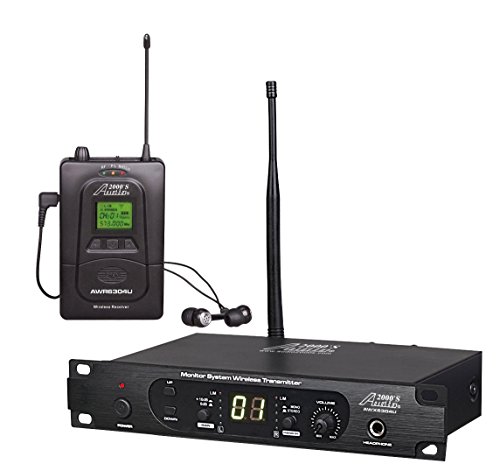 If you want a reliable solution for your ear pads and don’t want to break the bank, this is the best you can get. There are plenty of earphones that cost far more than this entire system.

The first thing we wanted to find out was if the low price meant limited functionality. In truth, it’s not as in-depth as most high-end systems, but it offers more than enough to get the job done well. 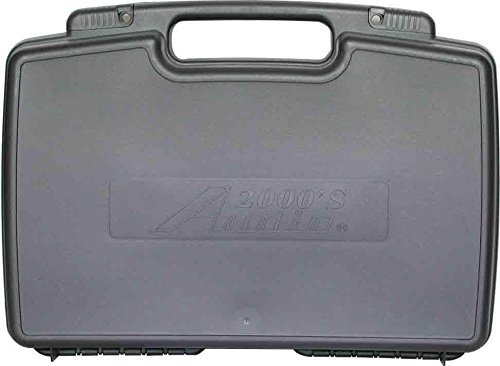 Being easy to set up is usually pretty high on the must-have list, and the AWX6304U transmitter is just that with 100 preprogrammed frequencies. It transmits over a 25MHz bandwidth and has very little interference or noise (if any).

One feature that surprised us is the addition of a built-in limiter on the receiver. In case of any excessive input levels, the limiter will kick in to avoid peaking and distortion. It also has four EQ settings rounding off a range of value for money features.

The downside is that the earphones don’t feel quite as sturdy as you’d like. They are universal fit, noise-canceling, and do a decent job. Either be extra careful with them or replace them with a better-built pair. All in all, this is a fantastic option for any guitarist looking for in-ear monitoring. 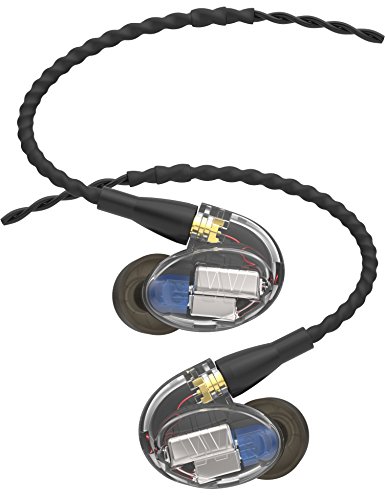 The Westone UM Pro 20 earphones are a popular choice amongst guitarists who perform regularly. They are known for being reliable, consistent, and comfortable.

At first sight, you’ll notice the clear casing that shows off the inner components. That might make it look like they are a little flimsy, but you can take our word for it, these earphones are built to last. 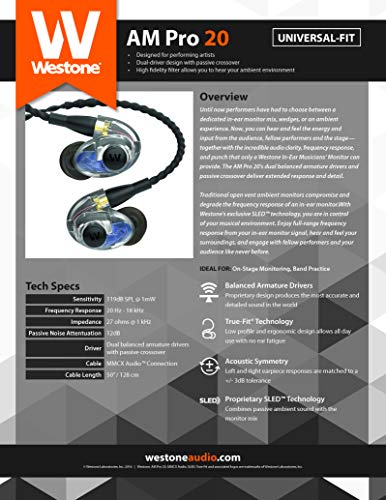 They deliver outstanding professional-grade audio thanks to their dual balanced armature drivers. Essentially, it’s those drivers that you are paying for; they provide extreme precision and clarity. On sound quality alone, these earphones are as good as any we have heard.

The rest of the components are also of premium quality, too. We often worry about cable strength for any gear that is being moved around so much in use. Thankfully, that’s not an issue here; the earphones come with a twisted MMCX audio cable that’s both flexible and tough as nails.

If you are doing long sets, a few times a week, you want something very comfortable. With a low-profile design and variable-sized ear tips, the UM Pro 20’s are a winner. 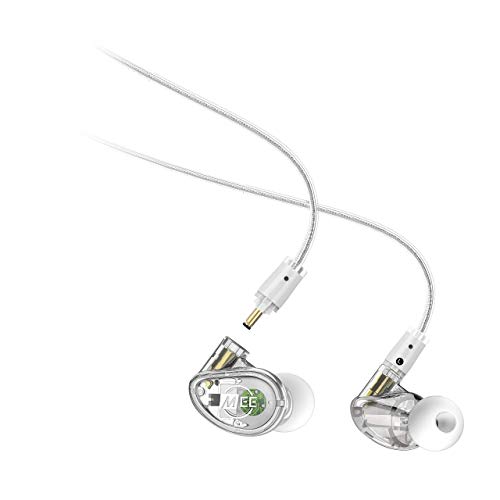 These earphones from MEE Audio are something a little bit different. They are modular, which means they are made up of multiple interchangeable parts (modules) and have a detachable cable.

Being modular is fantastic for customization so that you can put your own mark on the design. Keep in mind this is an ongoing thing; you can purchase the combination you want then make upgrades down the line without needing to start again from scratch. 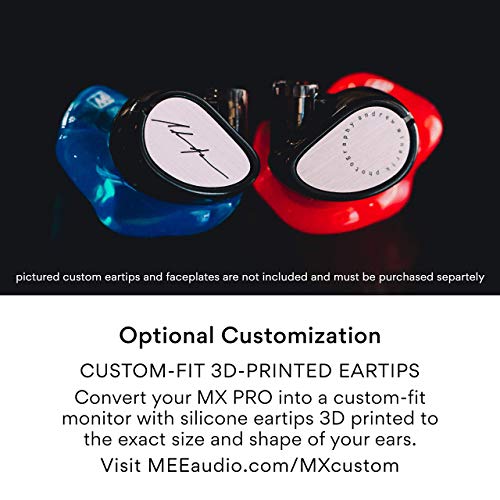 You can choose your earpiece color, custom faceplates, and even custom ear tips, which take around 3-4 weeks and require ear impressions. However, as impressive as all of that sounds, we are more impressed by how comfortable the standard ear tips are for prolonged use.

We would suggest the MX1 Pro earphones to anyone who wants a cheap yet good build quality upgrade from bog-standard monitoring. They are worth more than their entry-level price, that’s for sure. 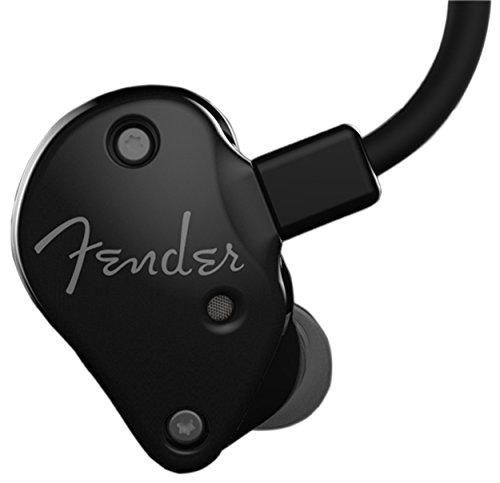 If you ask a guitarist to name a manufacturer that you can trust, Fender wouldn’t be far from the tip of their tongue. Despite being most appreciated for their guitars, Fender has a stellar reputation for making audio accessories of all kinds, from guitar amps to in-ear monitoring. 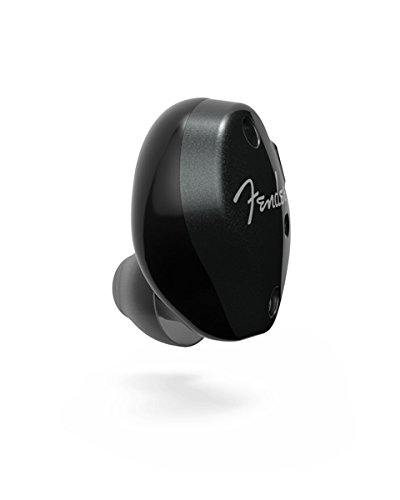 In terms of a broad soundstage, these earphones are perhaps the most dynamic. The driver provides a rich low-end, warm mids, and the tweeters deliver an extended high-end. This combination means you get premium sound with plenty of headroom and no distortion.

To cater to the masses, Fender used 3D-printed digital hybrid technology (DHT). They scanned thousands of ears to come up with a design that will fit perfectly for 95% of ears. From the brand name to the sound, to comfort, these are earphones you can trust. 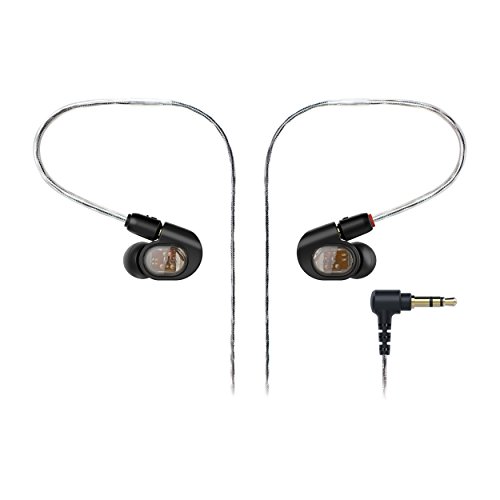 Audio Technica is one of the leading names in studio headphones, so it makes sense that they are at the forefront of in-ear monitoring, too. The ATH-E70 earphones come at a premium price, but they are a sublime mix of sonic clarity and blissful comfort.

With many earphones, the sound tends to be better at one end of the frequency range than anywhere else. However, the most pleasing thing about these earphones is that they deliver an extended response across the whole frequency range. 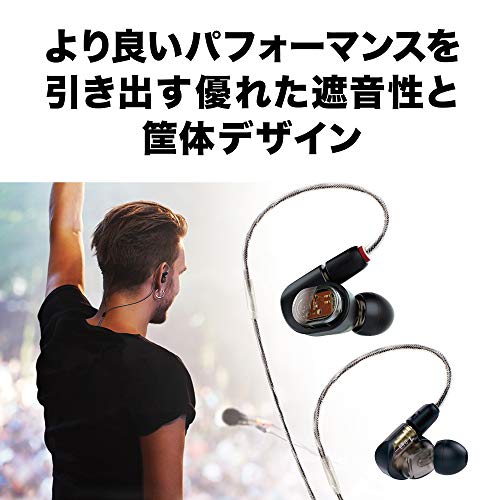 This well-balanced sound comes from three armature drivers and specially designed housing. They are particularly useful for working guitarists who play many different genres/styles, making use of their broad sonic range.

The custom housing was designed to boost noise isolation and does so very well. Isolation is further enhanced by how well the earphones fit. Audio Technica provides both silicone and foam ear tips, and the flexible memory cable helps keep them comfortably in place. They are considered industry standards by many, fantastic if you have the money to spend. 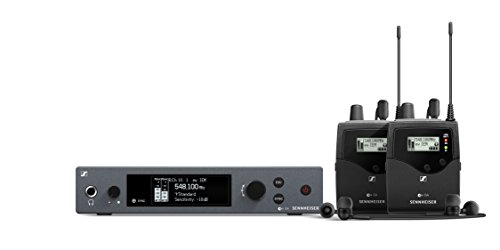 Sennheiser’s EW IEM G4 Twin system is one of the most rugged, road-ready monitoring solutions you can buy. It might seem expensive initially, but when you consider what you get for your money, it’s good value.

This system is aimed at guitarists who perform on a very regular basis. It’s not just rugged; it’s super high-quality that will deliver night after night. The transmitter has a lovely OLED display that gives you full control over your audio. 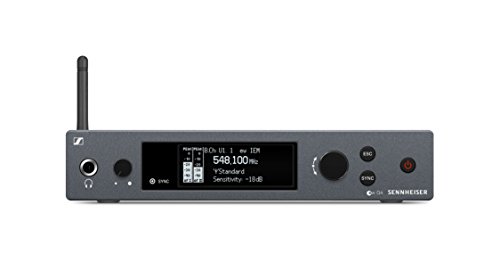 Transmitting at up to 42MHz with 1680 selectable frequencies, it’s safe to assume interference or noise won’t be a problem. Like similar Sennheiser systems, it offers up to 16 compatible channels for quick selection, and easy setup show after show.

With a transmission range of just over 300ft, we can’t find any real complaints with this system. If we were extremely fussy, we could say the earphones are not as high-end as the transmitter, but that’s pretty much true of any complete system. 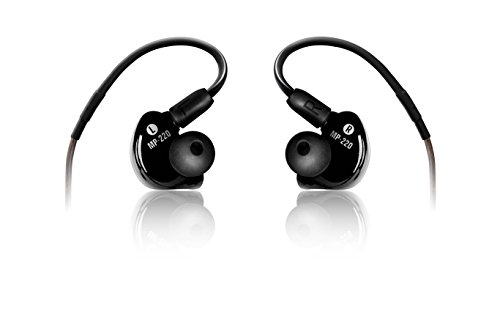 Mackie is a name that has been synonymous with studio and backline gear for many years. They are known for making quality equipment that feels like it would survive anything – robust as it gets.

The Mackie MP-220 earphones are no exception. We would rarely use the word sturdy for something as small as these, but it’s an apt description here. One of the most significant features of the MP-220’s is that they are dual-driver earphones. That doesn’t make them unique by any means, but in their price range, it’s certainly rare. 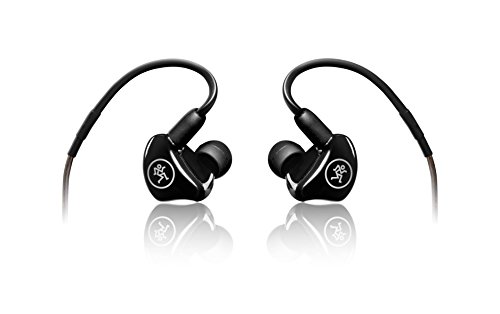 The advantage of having two drivers is that you no longer have a single driver struggling to reproduce an entire spectrum of sound. This added power is evident, especially when you hit the high-end with supreme clarity.

When it comes to noise isolation, they don’t quite match the best high-end earphones. But, it’s all relevant to the price, what you get goes beyond your money’s worth. They have a sensitivity level of 104dB, which means distortion, and any unwanted crackle isn’t going to be an issue.

Mackie supplies foam and silicone earbuds, both of which are relatively comfortable. Comfort is enhanced by the memory cable that fits nicely around the ear. Overall, these are an affordable way to enter the upper-levels of in-ear monitoring.